two kinds of dough, four kinds of berries, one mission-
to be adorable.
hello there, neighbors!
i dropped a whole mess of time into my morning treat-making yesterday,
but it was SO worth it,
i almost didn't mind that i F*ing missed out on national pizza day.
can you believe it?
like,
that's bush-league amateur-hour laughable bullsh!t.
this tart had better be some sort of wonderful to soothe and sweeten my sour grapes.
awwwwww.
haha.
guys,
i actually chose to go pizza-less.
i did.
after half of my fresh-baked tart,
and half a big bag of swedish-style miniature candy fish,
i figured my penance for such poor decision-making was to forego pizza,
and replace it with penitence.
i know what you're thinking-
too much is the right amount.
you're right.
and i had already had much too much of everything.
besides,
a tart like this is not for every day making,
but pizza certainly can be.
don't believe me?
that's fine. see for yourself: 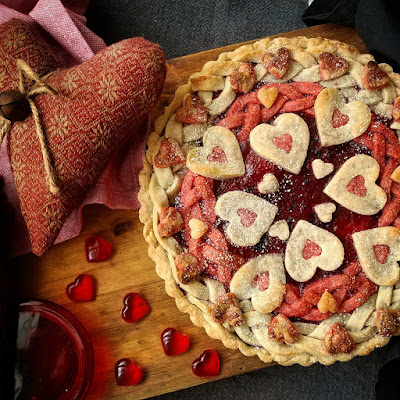 BLACK AND BLUE AND STRAW AND RASPBERRIES!!!!
c'mon, dudes.
with that pink sugar cookie dough, AND my custom big-crystal sweet pastry jauns, too?
hell yeah!
you want all the makery details, don't you?
ah, i see.
well then, here you go:
-
*
PASTRY DOUGH!
-
in a food processor,
combine:
3 T demerara sugar;
1/4 tsp salt;
2 1/4 cups a.p. flour;
11 T nearly-frozen vegan butterish;
3 T vegan creamchee';
1 tsp vanilla-
pulse your processor,
and add in very cold non-dairy milk, 1 T at a time,
until the dough clumps together, barely, when squeezed.
wrap it in plastic, and chill it for at least an hour (more is better, obvi).
-
ok......moving on,
when you're ready to get serious about tartin' around-
preheat your oven to 410℉, and use the convection if you're fancy like that.
here's the recipe for the pink dough.
now, you're gonna need that filling:
-
*
BERRY THEM ALIVE!
-
i got myself a frozen pound of mixed whole berries.
how easy was that?
i like the frozen ones for these applications, because their little bodies
have all been transformed by exploding their wet cells in those icy temps.
that helps them become a pectin puddle as they defrost.
i think. i mean, i'm not a scientist.
anyway,
in a biggish small saucepot, on low heat,
combine those with-
1 tsp vanilla;
1 tsp lemon extract;
1 tsp lemon zest;
1/4 cup powdered sugar;
3 T vega creamchee'.
once that's been stirred and slurried,
remove a tablespoon or two of the juice,
and add 1 T organic non-GMO cornstarch, stir it well,
add it back in,
and turn up the heat until it thickens,
which happens quickly, so pay attention.
let that cool off, so it doesn't melt your pastry.
...i put mine whole pot on a snowbank outside in the frigid sub-freezing temperature,
and it was cooled pretty flippin' quickly. no surprise there.
-
ok.
roll out your double-dose of dough on a floured surface,
and put 'em in the pan of your choice.
i used a tart pan because i HAVE a tart pan.
makes sense to me, no?
yeah.
i got medium-level fancy with the decorations because i prefer kyoot treats.
time was tight, and work was waiting,
and i STILL had my damned dumb dirty dog, crabtree,
to walk through the feet of driven snow in the woods,
which he is recalcitrant about on the best days (this was not one of those)
friends,
i am a very emotionally in-touch and sensitive man;
i make tarts with two kinds of dough.
i drag my bullish bull-headed shark-bullet bull terrier all across
this arctic winterscape because he needs exercise, whether he wants it or not,
and i am not ashamed to say i enjoy the holy livin' ever-lovin' heck out of a pretty little pie.
that's real.
i baked this little bad baby b!tch for about half an hour...
i don;t know exxxactly how long because i was doing twenty-hundred things at once,
and forgot to set the timer on the oven.
it's at least twenty minutes, though, for sure.
if it looks good, it's good.
you'll figure it out.
i believe in you.
a little powdered sugar,
and no self-control.
those were the final touches,
to be rectified later by abstaining from a pizza pig-out.
***********
is it a snow day, again?
bro, it might be.
i've got two loaves' worth of sourdough on a preliminary bulk rise on the counter.
i've got a second cup of hot tea steeping on the table.
i've got about thirty minutes of organizing to do before my day really gets started.
saturdays aren't any different than any other day when you work all seven.
that's the truth.
so, today is the day, just like every day,
and i'm making decisions that should lead to positive outcomes.
thoughtful, introspective, considerate, calculated cause-and-effective
intentional direct active participation.
that's what i've got.
y'know what else i've got?
that P.M.A.
yup,
and it's a bad brains kind of day,
so it could be an ital kind of night.
it's ALL really happening,
and that's the whole point;
never quiet, never soft.....
this hot fire spat by Albie Rock