shoutouts to my grandma.

we called her mae.
actually, maybe everybody did?
i dunno.
but she wasn't nona, nana, grammie, or any of that noise.
she was mae, and that meant everything.
i've been having some homesick pangs and thangs these days-
missing my people, missing the hustle and the riot
of hamden and new haven connecticut....
the busy business and the jam-packed places and folks who knew me longest,
and of, course, i've been craving the food!
well,
i do know how to cook, and i do know what i like....
so i did a little throwback to wednesdays at mae's house from my twenties.
i'd go there before work, and hang out for a bit,
visiting with her and my great-aunt edith,
a.k.a tē-tē.
mmhhmmm.
that's what you get when you try to say aunt edith as a tiny inarticulate idiot.
it stuck, and that's who she was to us for our whole entire lives.
everybody gets named, and renamed, and rarely do they get to name themselves.
cue albie rock's exceptional outlier status, of course.
ANYway,
i made myself some comfort food, grandma-style,
straight from the little italy streets of new haven's wooster square neighborhood.
check it: 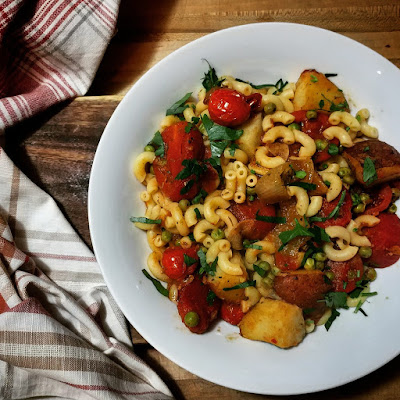 S'SIMPLE, S'GOOD!!
stewed tomatoes, onions, garlic, potatoes, peas, and elbows, bro.
yea.
just like strega nona used to make, only maybe even a little baby bit better...
so, like, don't tell her, ok?
we got those al dente macaroni in full effect,
but they're just the foundation of this hearty bowl of hottness.
-
the sauce is key here-
and by sauce, i mean, the tomato magic.
it starts with 1 T olive oil, and 1/2 cup rough chopped onion,
tossed around in a small very hot pot with one fat handful of cherry tomatoes.
yeah.
the high heat bursts the tomatoes, and the onions get translucent quickly-
i added two cloves of sliced garlic, and let that all get a browned just a touch-
then i added the spices:
oregano, basil, thyme, and sage, plus heavy shakes of GPOP,
and pink salt and black pepper and crushed red pepper flakes, too.
i gave it a few swirls to get everything blended up,
add a splash of balsamic vinegar, and one 15oz can of sliced stewed tomatoes,
with herbs an' sh!t all up in there with 'em.
YEAH.
dudes, these jauns are realy-real, f'real.
i was transported to the nineties, man, hangin' with my long-gones,
feelin' at home in a deep, dark, cozy kitchen with those old ones.
damn, it made me happy-sad in the best way.
a half cup of warm water, a half cup of frozen peas,
and a slow low simmer had the whole thing turning up exxxtra-expert.
-
but that's not all-
no way.
MORE goodness was called for,
and MORE goodness answered-
boiled quartered skin-on red potatoes, two of 'em,
softened, drained, and fried in the empty pot with a fat pat of vegan butter?
yeah.
that's how you make some true berserker hottness pop off in your mouth.
y'add the potatoes to the tomatoes and you add both to the 'ronis,
and that's when you give it a dash more pepper,
and a bunch of freshie-fresh parsley sprankles.
too much is the right amount, man,
...and by the way,
a cup of uncooked elbows is a decent heap of soft beige bendies after the boil.
word up.
i ate alll of it.
2 potatoes, all the tomatoes, the peas, the full pot of what's hot in these streets.
i needed it,
and i'm glad i had the presence of mind to make it happen.
if only ANYthing else was so easy.
ha.
*
i continued my nostalgic noshing with some breezy-inspired chips,
the feelings of closeness that y'all might get from other avenues?
i literally ingest them, or it doesn't work.
i don't just eat my feelings to bury them,
i eat them to nourish my whole heart and head as well.
damn.
that's probably not normal, is it?
i dunno.
and then,
after filling myself up literally in an empty place,
i valiantly failed to keep my eyes open for very long afterwards.
that's what happens on a wednesday night up here in the woodsly goodness.
and also on thursday.
basically,
that's what happens.
all of it, or rather, none of it.
that's how it unfolds at the moment, but maybe once we teleport to the future,
one hour ahead, on sunday,
things will get a bit brighter metaphorically as well as physically....
time will tell, or it'll stay silent, but i'll still be doing my best to do better;
never quiet, never soft.....
this hot fire spat by Albie Rock