berries, duders.
berries are just so dang awesome.
really.
and that is especially true of the wild maine blue-bombs.
bluberries have got it going on.
and the woodsly goodness is right on the borderland of the best ones around.
mmhmm.
i love those itty-bitty smaller-than-the-tame-variety circles
of activated antioxidant excellence.
i had a whole bunch on hand,
and i had the freeze-dried version of 'em, too.
i'll say another 'nother thing, also, neighbors-
the wild small guys are way more expert than the big fatties.
i assume that's probably true everywhere.
those cultivated rounders are good,
but the free-range roamers are great.
so,
that's what i'm using when i get the choice, every single time.
anyway,
when it comes right down to the bottom-line dirt-dirtiest things,
it isn't enough to rest easy on the laurels of a good thing being good.
i mean,
not when it could almost always be better.
and better is better than best,
when best has room for improvement.
that's a thing.
so,
anyway, anyway,
keeping in mind that striving for maximum hottness never ever takes a break...
check the better-than-best-type teleport: 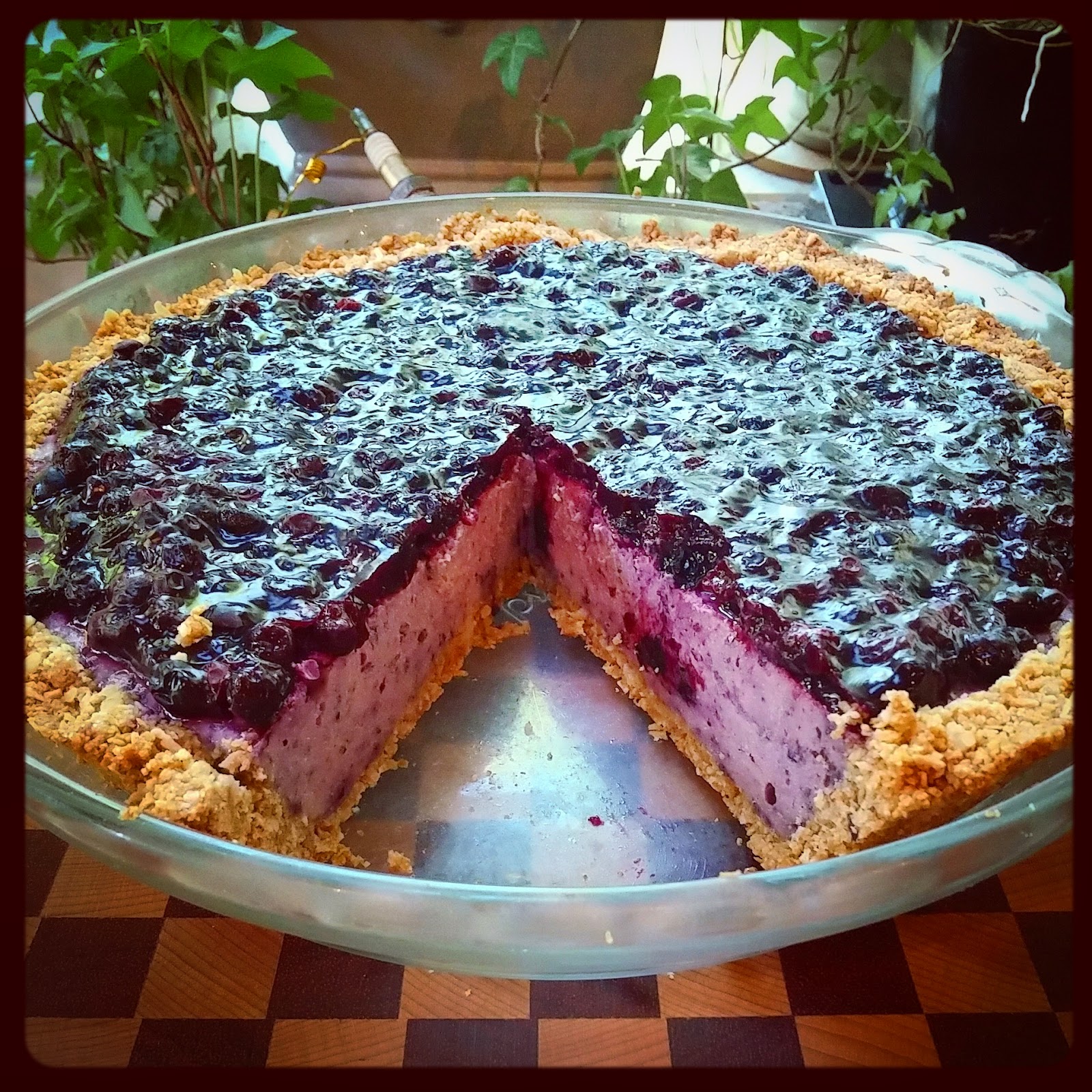 yeah!!
my vegan blueberry chee'cake is for the future.
time-travel style.
i used four kinds of thickners, y'all.
four different mass-affecters,
for the ultimate in dense, soft, sexy cakey business.
i doo-doo that sort of freaky sh!t.
tapioca starch, corn starch, egg-replacer starch, and flour,
in small but important roles, all contributed to making this one the best one.
and seriously, kids,
it IS the most elite one i've yet tasted.
that thick crust?
oatmeal, raw sugar, graham crackers,
and some of that shredded unsweetened dry coconut,
gummed up and glued together with butters and vanilla and soymilk an' that.
so firm,
so soft,
so crumbly,
so perfect.
with that lemon juiced, lemon-extracted, vanilla laced,
lightly sweetened simmered saucy berry compote
drizzled spread, and set up to chill out on the superior-side of the circle.
that's what i'm trying to say, friends-
this one gets an A+.
***********
ugh.
i think we're starting to slow down.
like,
at the tattbomb studio, i mean.
thirty-three percent.
that is what history has taught me to expect to see disappear.
that's a lot?
no sh!t that's a lot.
it's this damned tourist town.
damn.
love and hate are vying at all times for dominance.
i mean it.
all summer long,
while i'm enjoying th scenic expanses of this minute mountain vale,
i'm also hard-heartedly hating and harranguing the hapless tourists.
but,
when they leave?
mhmm.
so do those fat movie checks.
and i love the dough, yo.
that's no joke.
so, sure, the roads and the restaurants are wide open,
but my wallet isn't as obese as it was last week, by about a third.
ha.
hard styles return to the woodsly goodness it seems,
just in time to start stacking firewood.
cycles, circles, sumps, stumps, summits, and sleep.
yikes.
it's ALL really happening.
this is the way it continues to unfold,
and that's that;
never quiet, never soft.....
this hot fire spat by Albie Rock