y'know how to cure the monday blues?
work every day.
then, there's no mondays; or, they're all mondays,
but either way, there's no point to getting sad about going back to work,
because you're always at work.
maybe that sounds terrible to y'all, and that's cool-
relaxing and having fun sounds like my own personal hell,
so we'll just agree to disagree, and i'll go hard every day,
and you can be bummed out when the weekend is over.
anyway, today is monday, but that's nothing to me, man.
however:
yesterday, after a slew of tattblasted zipzaps,
and a long stretch of workin' and flexin' and stuntin',
i left an hour early and got deep into some things.
yup.
homemade radical expert vegan pizza is sort of my field of expertise.
and my skills don't take days off any more than the rest of me does.
check the teleport: 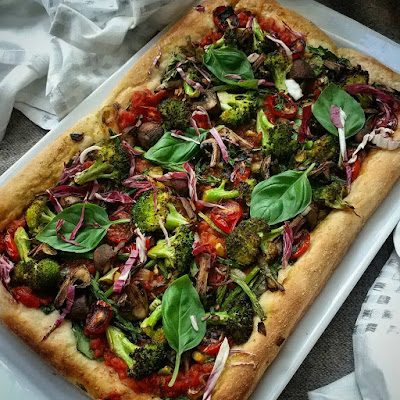 PEE EYE ZEE ZEE AYY!!
that's a slow-proof sprouted whole wheat dough, with added wheat germ,
just to give it that exxxtra healthy fiber upgrade.
here's the recipe:
-
*
SPROUTENWHEATENDOUGH!
-
in your dough-hook-equipped stand mixer,
knead the following all together-
1 cup sprouted wheat flour;
1 cup bread flour;
3 T wheat germ;
1 1/2 tsp salt;
3 T vegan butter;
1 pkg fast-actin' yeast;
1 tsp sugar;
1 cup not-too-hot-but-more-than-warm water,
plus 1-2+ T more if necessary-
beat it up until it's smooth and firm and fully doughfied, like 5-8 minutes,
cover the whole bowl with plastic of equivalent,
and refrigerate the whole thing all flippin' day.
y'know?
like, i made my dough at seven a.m., and let it hang out in coolness until 5,
and then spread it on my olive-oiled half-sheet pan,
and let it rise with all sorts of activated warmth while the oven reached 480℉
with the convection circulating that hot air like it was scandalous rumors, bro.
mmhmmmm.
*
that's how you doo-doo grown-man sh!t in the kitchen, neighbors.
and while that oven keeps getting hotter,
the toppings keep getting more numerous.
yeah.
too much is the right amount.
look: 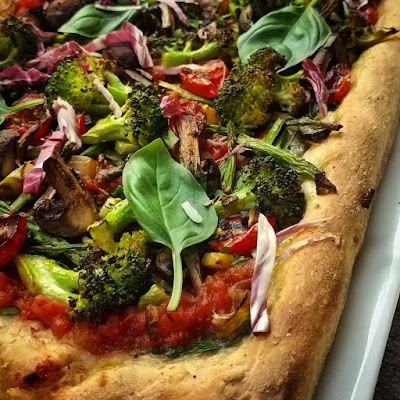 that's ALL the goodness, all at once, all in one place.
wordimus prime, b.
we got pulped fire-roasted chunky tomatoes as sauce,
and that's spread over two fistfuls of baby kale,
and one big vidalia, sliced and caramelized.
tight.
then there's the drained tomato-juicy broccoli crowns.
since you've kinda gotta add liquid to make broccoli better when it's sauteeing,
so it softens properly, y'might as well use the juice from those fire-roasties, right?
i know. that's smart.
there's scallion sprankles.
there's also dry-pan-fried asparagus spears, and blackened sliced tomatoes.
how about those mushrooms?
quartered and sizzled into thick, meaty awesomeness.
a little pink salt is all i added to the pan, man.
huh?
what?
c'mon, don;t be dumb-
of COURSE i had the fattie-boombattie fried garlic sprankles.
jeez- rules is rules.
...and after it baked to a beautiful brown?
i freaked it off with radicchio ribbons and fresh-plucked basil leaves.
that's riiight.
if you ain't taking pizza to eleven, you're just taking up space in the worst way.
***********
and i'm gonna work again today.
and it's F*ing raining, so dog walking is gonna be an ordeal.
and i'm at work alone today while the pizza joint next door is closed-
that's fine, really,
but damn if we don't look closed af when there's no cars but mine in the parking lot.
it's all really happening,
and while i'm psyched to tattoo a great big hawk on ron, whoever he is,
it's not likely that the wonderful woman of my dreams is going to just show up with him
and also just happen to be looking for competent conversation
and highly-suggestive expressive facial mannerisms.
-
i've been told my face says it ALL.
i guess i throw looks all day, dudes.
and here i thought i was unreadable;
but i think that was meant as more of a correlation to a poorly written story.
hey- at least it's a true story.
ugly and honest is better, isn't it?
we'll see.
because apparently i can't disguise my delight nor my distaste.
it's all really happening and it's written all over my F*ing face;
never quiet, never soft.....
this hot fire spat by Albie Rock