kids eat cupcakes.
on birthdays, they're better than a whole cake in a lot of ways.
i mean,
everybody gets their own, so that's cool.
and there's heaps of frosting on those little guys,
and who doesn't love frosting?
weirdos.
it's the only acceptable topping for a moist magical cakey cup.
mmmmm.
cupcakes for cohen.
that was the purpose.
the fifth birthday party in the park.
the wild thing themed extravaganza his ma organized.
with tinkergarten-guided funtime party for twenty kids.
y'know what that's like?
it's awesome.
and there was a piñata, and pizza, and noisemakers-
plus the kids all made crowns, and made masks
...and there were these cupcakes, too: 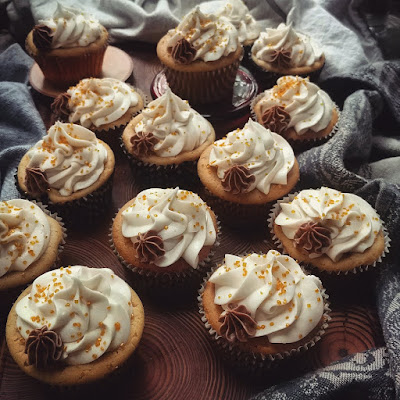 pretty cute.
gold and stripes and chocolate and vanilla and brown sugary sweet cupcakes.
i'll give you the recipe so you can do a nice thing for the kids you know if you want to.
-
*
CUPCAKES
-
preheat the oven to 350℉
-
in your stand up mixer, with the whisk on it, cream together:
1 stick vegan butter;
1/2 tsp salt;
2 tsp vanilla;
1 pkg vegan instant vanilla pudding!
1/2 cup non-dairy yogurt;
3/4 cup sugar;
1/3 cup light brown sugar.
whip it up, then add:
1 cup non-dairy milk;
2 1/2 cups king arthur flour;
1 tsp baking soda;
2 tsp baking powder.
whisk it all together until it's thick and luscious,
and spoon it all evenly into those cupcake tins.
bake 'em for 30 minutes, and cool them completely.
then frost 'em up with the big fluff action.
-
*
FROSTIN'
-
in the same (rinsed) mixer, with that whisk ready to go, whip:
1 stick of softened vegan butter;
3 cups of powdered sugar;
1 tsp vanilla;
1/3 cup non-dairy milk.
beat it up until it's clouds of sweetness.
i have that big frosty swirl maker thing, so the frosting is BIG.
i like it.
and golden sugar spranks to keep with the color scheme.
-
anyway,
the kids had a great time.
the other moms were clearly envious of mama's party skills.
balloons, and party bags, and activities, all poppin' off without a hitch.
i was holding that baby, soaking up as much contact as i could.
like a camel, supersaturating my skin with all the love i could absorb and reciprocate.
i figured that was a good idea.
and it kept her sleepy and happy, and also kept the both of us out of the way.
the whole party was expert.
all the kids played and played, and ate and ate,
and the afterparty, where just the cousins on the playground was the perfect wind down.
they had fun, that's the important part.
and the cupcakes were pretty good, which i guess was my contribution;
never quiet, never soft.....
this hot fire spat by Albie Rock