shoutouts to june.
i mean, y'know?
this is it.
the big premier first day of june.
six months deep into the year and it's forty something degrees first thing this morning.
wtf.
it's sort of a trick, isn't it?
you finally get to june...and we're here,
but it's F*ing cold out.
total bullsh!t.
but, y'know what i did to say goodbye to may?
i saw jay leno.
i'm serious.
swear to goodness.
jay leno, doing stand up, in hampton, new hampshire.
that was a largely unexpected turn of events.
don't get me wrong- i was invited, and i accepted,
it's just very out of my wheelhouse to go do a fun thing.
really, any chance to have a moment with breezy where we're
both being socially outgoing is something i'll say yes to.
and on the road home, late, in the cold, the clock turned to midnight,
and i said the magic word...twice.
and when i got home and fell asleep for not enough time?
well,
as soon as i woke up, i spit it out.
first things first, again....
just to make sure i'm cultivating coincidence correctly.
i said it, and i used all the summoning spirit and memory of fortune's favor
to conjure up some good luck and great times for the foreseeable future.
mmhmmm.
rabbit! rabbit!
that's what you say when you want that good-good.
and i doo-doo that mantra mana, man.
watching a thing, holding hands, driving and laughing and drinking night sodas?
c'mon.
that's F*ing expert times.
weird roads, and no GPS, and just a couple people enjoying spanning time.
damn, that stuff feels good.
*
um,
i also made bagel braids.
yeah.
i like bagels, i like pretty food, and if i have to be honest,
sesame seeds might very well be my favorite seed.
so, look at what i ate way too many of: 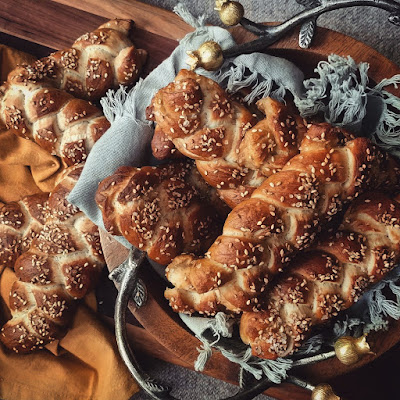 PRETTY FOOD TASTES BETTER.
they're basically soft pretzels with olive oil and no butter in 'em.
oh, and the seeds are toasted first.
i've listed the recipe a LOT this year.
i'll skip it as we jump into june.
suffice to say i ate nine out of a total of fourteen,
and i don't regret it at all.
i'm also happy to report that my no-sugar month is DONE.
yup.
y'boi is back on that sweet thang, and y'all had better be ready for MORE cookies,
MORE cakes,
MORE frosting,
and MORE of everything expert in the dessert section of my life!
instead of abstaining from sugar in june,
i'm on a material fast.
do you know what that is?
it's when you stop buying non-essential indulgences for a predetermined span of time.
in this case,
i'm off of that casual shopping for the month.
no amazon orders, no tj maxx trips, no impulse buys at all.
no toys for the boys, no pearls for the girls, no logs for the dogs.....
just food for me and equipment for AMPERSAND TATTOO, and that's it.
...and maybe a car.
ha!
it's all gonna be okay.
it's all really happening,
and whatever the heck that means,
it's going precisely along the right path to awesomeness.
i think that's true, and i said some superstitious words about it,
so we're all good;
never quiet, never soft.....
this hot fire spat by Albie Rock