meatless AND wheatless is how i like my balls, kids.
that's no joke.
and i made some advances in homemade ball technology recently,
that i'll share with you if you'd like.
here's the thing-
it's sandwich week,
and that's always something to look forward to.
i mean, sure it's sort of a bullsh!t celebration.....but no more so than
superbowl sunday, or fashion week or st. patrick's day or lent.
that's a real dumb one, and it lasts as long as the great flood, too.
so really, i'm thoroughly enjoying an outbreak of sandwiches over here,
and i don't see how anybody who eats bread would be sad about it.
like,
i'm fully prepared to blarp the F* out on whole lovely loaves of whole grain greatness.
that's real.
and on day two, i even made two sandwiches (no, i'm not doing three on the third)
ANYway,
i made up some meatless wheatless italian protein polinas,
and they are F*ing expert.
yup.
check the teleport: 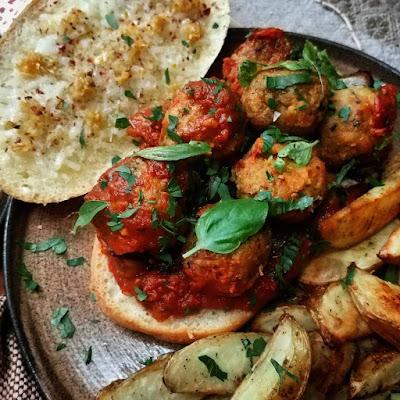 WORDIMUS PRIME!
homemade marinara,
thiccc caramelized onions,.
fresh picked basil,
chopped flat italian parsley sprankles,
homemade bread transformed into toasted daiya cheesy mozzarella garlic bread,
and those balls, y'all.
i mean, the bread and the sauce and the onions and the green bits
and the garlic and everything all comes together to make some powerful flavor
exxxplode in your skull from the first bite to the last. 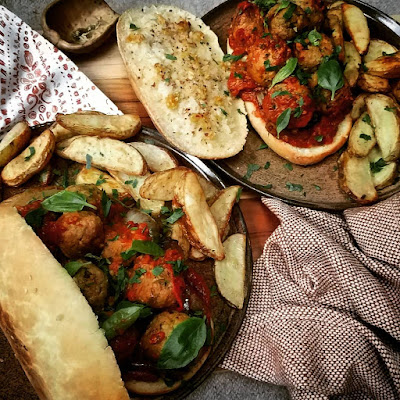 i made two, and i shared 'em, because i'm nice like that.
dylan popped by to endure some of the darkest, dourest, deluged,
depressing labor day weather there's been in an age.
but what better way to span time than by eating sandwiches, am i right?
of course i am.
wait.....and are those garlic fries?
they sure as sh!t are, homeboy.
wedges of chefs' whiteys, tossed in oil, with salt, lots of pepper,
a shake of nutritional yeast, a lotta Garlic Powder and a little Onion Powder
to activate the exxxtra hottness you know you want.
that's real.
baked at 400℉ on parchment on a baking tray,
which is precisely the temperature i baked the garlic bread buns at,
at the same time as i added olive oil to the wedges
after i tossed 'em around once they began to get golden.
y'follow?
i already had a hot oven with those fires in there,
and i put the cheesy garlic ovals in later, so they'd all be done at the same time.
nice.
-
i had three cloves of crushed garlic, sauteed on medium heat in oil,
slowly roasting them, but NOT browning them up,
which i add to buttered homemade loaves,
with GPOP and that minced daiya on BOTH sides, guys.
i did add a dash of fire-roasted tomato sprankles to the tops,
to make 'em look prettier, but that's not actually necessary
unless you're as dedicated as i am to devoting energy to extraneous ornament.
the bread itself was baked earlier in the day-
with dough i prepared the day before.
yup.
24 hour cold-proofed white whole wheat from-scratch goodness, buddy.
that's my thing.
-
*
LOAVES!
-
1 cup king arthur  bread flour;
1 cup king arthur white whole wheat flour;
1/2 tsp sugar;
1 pkg regular-actin' dry yeast;
1 1/2 tsp sea salt;
3/4 cup warm water;
2 T olive oil.
that's it.
kneaded up however you see fit, and allowed to rise in the fridge all day and night.
i shaped two buns and two hoagies, olive oled the tops,
and let 'em rise while the oven heated up to 400,
then i baked them for twenty five minutes, turing once at 12 minutes,
and adding a splash of boiling water to steam the edges at 15 minutes.
...and they turned out incredible.
*
if you've ever caramelized an onion, you know that it takes time, a little oil,
and medium heat to really get 'em to turn golden.
i cut my vidalia ribbons fatter than usual, and they truly contributed so much richness
to my already epic epicurean kitchen experience.
and when you've got all the elements in agreement on one plate,
you're going to transcend simple sustenance,
and ascend alongside your palate to victual valhalla.
i'm already there, man.
-
i made my manly marinara.
that's how you doo-doo that freaky sh!t.
and it does exactly what you'd want it to on a sandwich like this one.
lubricates.
activates.
upgrades.
energizes.
and when you factor in how it turns up the balls to eleven?
y'all had better just c'mon, now.
i mean, what are you?
an A*-hole?
no way, neighbors-
we need marinara on a meatlessball.
rules is rules.
miss me with that grape jellied scandinavian bummer business.
this is molto italiano, and molto expert, and molto delicious.
word.
so, let's talk about my balls:
-
*
BALLS!!!
-
in a high-speed mixer,
combine:
3/4 block of tempeh (that's like 6 oz +/-);
1/4 cup sweet onion;
3 cloves garlic;
1 cup tomatoes.
puree it to a truly sloppy mudlike consistency,
and add it all to a small sauce pot, with 1 T oil.
saute the whole messy mass on high heat until it just begins to color,
then add:
1 tsp oregano;
1 tsp basil;
1/2 tsp ea GPOP;
1 T nootch;
1/4 tsp rosemary;
1/4 tsp crushed red pepper flakes;
1/2 tsp sage;
1/2 tsp thyme;
1/2 tsp dried parsley....
and 1 cup broth of your choice,
+ 1 T tamari, and 1 T red wine vinegar.
bring that up to a boil, then reduce the heat and simmer it, stirring often
until the whole thing looks saturated and 0% watery.
add:
1/2 cup chick pea flour;
1/2 cup bread crumbs OR trader joe's rice crumbs to make 'em GF,
salt, and pepper and fresh basil and parsley for added prettiness.
let it cool enough to handle without burning yourself,
and with moistened fingers, form your smoooooooth balls.
yup.
you'll wanna arrange 'em on parchment on a baking tray, to bake at 375℉
for about fifteen minutes....but no longer than that.
these are the kind of thing that once formed, firmed, and fired,
you'll wanna simmer in sauce to finish off.
i learned that yesterday,
and i'll be cooking them IN the sauce for the last fifteen no matter what from now on.
but that's what's up.
and when you add the fresh-plucked basil?
oh MAN.
that's that exxxtra eleventh-level pinch of big action.
there're no bad parts to this sandwich.
it's 100% elite all day long, and i'm pretty pumped to have had this little
piece of sunshine on an otherwise sh!t-salad slap-off of a laborless labor day
under the clouds and the downpours tears of the impending slow season.
yikes.
but, i mean, just look one more time: 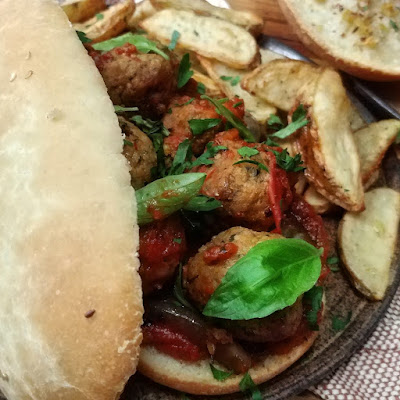 too much is the right amount!
and that's no joke.
-
and like i already mentioned,
i'd eaten a whole other 'nother other luxxxurious stack'em-up sarnie
prior to going hard on this long nasty boi.
y'gotta.
it's sandwich week,
and it's been waaaay too long since the last one.
rules is rules,
and the rules state that it's all sandies all week, always.
miss me with those other food weak meals, holmes.
i'm all about this sandwich life.
...and it's a good thing- because if i was about real life,
i'd be doing far far worse far far more often;
never quiet, never soft.....
this hot fire spat by Albie Rock