yooo!!!!
how about a brutally burly barbarian black bean burger?
yeah?
yeah!
that's what's up.
but what if i put pink bean chili on top?
is that cool?
it is?!
yeah!!
okay, i think i'm getting the idea.
so, if i put a bunch of spicy stuff on a homemade jaun,
and activate it all with turbo-spicy crispy fries,
would that be...........expert?
look: 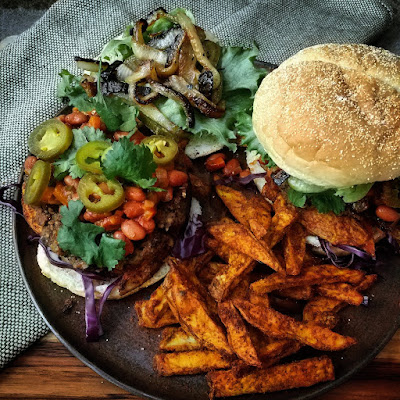 YUUUUUUP!!!
SO expert.
hey, don't go getting too worked up about it, but that's a soft store-bough bread.
yeah. it is. and it works, so i'm not sweating it at all.
we got crispy green lettuce.
we got crawnchy purple cabbage.
we got caramelized onion.
we got pickles jalapenos.
we got cilantro sprankles.
and all of that adds up to an ultra-activated accoutrement complement.
this isn't some ordinary semi-southwestern selection for suppertime, though, neighbors.
nope.
this is muh-F*in' sandwich week,
and that's where the real ones come to show and prove.
hahahah.
it's literally only ever been just me.
which is sad, in a few different ways, but i'll live, man.
the thing is, i had the oven cranking for other stuff,
so i baked up some crissssspy seasoned spicy fries:
that's three potatoes, split into sticks,
drizzled with olive oil,
and tossed with an absolutely subjective sampling of:
cumin, coriander, GPOP, black pepper, pink salt, smoked hot paprika,
and turmeric and cayenne.
uh-huh.
coated, arranged in a single layer, and baked until their spicy skins were golden and sexxxy.
that's great stuff. i made a lot. i ate them all. that's what i DO.
* 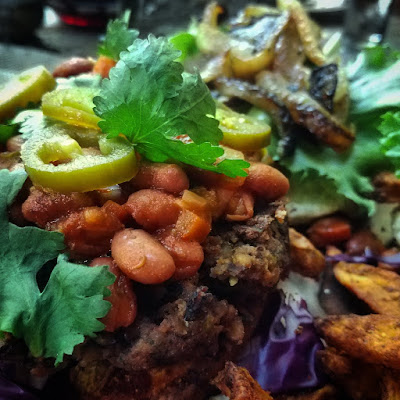 the chili was also pretty freakin' good stuff.
i had one finely minced small white onion,
one even finer minced small carrot,
one and a half cups of chopped sweet baby grape tomatoes,
three cloves of garlic,
a spoonful of cumin, a spoonful of coriander,
guajillo pepper powder, smoked paprika, oregano, thyme,
and two tablespoons of smashed-up cilantro stems simmering on the stove
long enough for the onions to get translucent over high heat with just a little oil.
to that i added one cup of vegetable broth,
one cup of crushed tomatoes,
a glug of maple syrup,
a splash of tamari,
a shake of liquid smoke,
and a 15oz can of drained pink beans.
a bay leaf, some fresh cilantro, and a long slow low bubblin' spell
had me all sorts of savory and salivatin' over this stuff.
there's a lot IN it, but there's not a lot to making it.
and that's nice.
so, that was thick and rich and spicy and smellin' hella good,
and that's the sort of thing we all like, isn't it?
i think it might be.
* 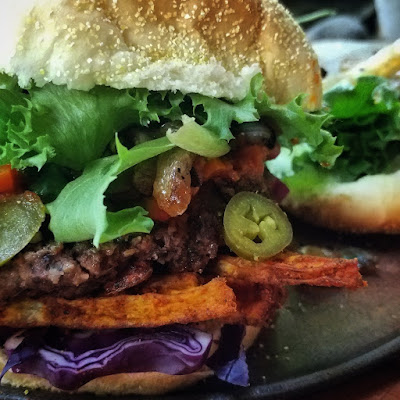 and then there's the burgers.
dudes,
i've gotten increasingly distant from the veggie burger making scene.
i'm never ever really all that psyched about 'em.
however,
inasmuch as i don't like making them,
i really enjoyed eatin' these ones.
i looked at a lotta recipes,
and then tried to make something from what i could recollect.
want the details?
alright:
-
*
BURGZ!
-
1/2 caramelized onion;
3 cloves roasted garlic;
1 tsp ea Garlic powder Onion Powder;
3 T tamari;
1/3 cup breadcrumbs( i used gf rice jauns);
2 dashes liquid smoke;
3 T parsley;
3 T cilantro;
1 cup dry-fried black beans;
1/2 cup toasted walnuts;
1/3 cup chickpea flour;
salt;
black pepper and a dash of cumin and paprika and thyme and sage to taste.
i pulverized all of that in a food processor until it was a semi-chunky pasty mess.
then i let it sit for thirty minutes,
before i formed up 4 BIG patties, and fried them, on medium-high heat,
with a generous dose of oil,
and a splash of water when the outside started looking dry.
i wasn't expecting that, but the interiors were still soft and hearty and neither dry nor crumbly.
so it worked.
and they tasted good.
and that makes me happy always.
and when everything got layered up?
it went to eleven.
duh.
c'mon, man.
i'm not tryna have a bad time during sandwich week.
.
.
.
...but i AM.
i have all the details of real life falling apart all around me.
it's okay, man.
i'm not looking for sympathy, i'm just sayin'-
outside of the tippity-tappity edited typing of this unidirectional missive
about my magnificent meals,
there are even more massive misgivings about every other single thing.
so, it's like destiny's dominoes are tumbling all day,
but not in any discernable sequence-
i can never predict where the disruptions will begin,
or which direction they'll avalanche and launch in,
and that's weird, because that's exactly how real dominoes DON'T work.
and meanwhile i'm eating a LOT of food and a LOT of bread,
and i can't say for sure that that's a good idea,
but maybe neither is anything else,
so i'm making it through until monday,
and then a new plan has to get formed up for the fall and the winter.
none of it feels good, but the sandwiches TASTE great, so at least there's that;
never quiet, never soft.....
this hot fire spat by Albie Rock