i dunno why the sandwiches have been so italian lately.
i mean,
sandwich week is non-denominational,
anti-nationalist, 0% ethnocentric, and 111% inclusive as long as there's bread involved.
like, c'mon, neighbors-
it's just sandwiches all the effing time.
and yet, here's another 'nother one that feels molto italiano: 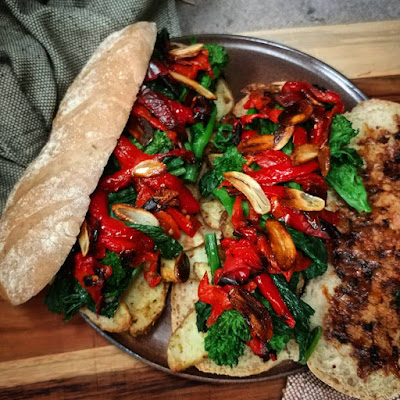 i like that red white and green, son.
y'feel me?
roasted red peppers.
oregano-rosemary potatoes.
blanched and seared broccoli rabe.
thiccc fried garlic slices.
caramelized sweet onion pesto.
and sesame-seeded semolina bread right out of the oven.
expert in all the ways that matter, man.
the colors are bright.
the textures are tight.
and the taste is off the hinges with exxxcellence.
how much exxxtra-virgin olive oil am i reppin' on this one.
a lot.
and does that make a difference?
it does.
*
the potatoes were tossed with oil, salt, pepper, nootch, oregano, and rosemary,
the roasted up until golden at the edges and soft in the centers.
that's perfect.
how hot was the oven?
400 luscious degrees.
*
the peppers were blackened, bagged, peeled, and heated up,
then sliced, stripped, and laid out with their full-bodied rich slippery selves
all across the top.
i've made good ones before, but these were some of the best.
i roasted them the night before, in a 400℉ oven until they blackened,
and put 'em in a plastic bag, which loosens the skins for easy removal.
expert.
*
the broccoli rabe was blanched for exactly two minutes in boiling salty water,
then drained completely, and pan-fried with a dash of salt and pepper
for another couple of minutes...it doesn't need much, it's already great.
*
fried garlic speaks for itself. and it says: "i'm dope all day every day."
and that's no joke. 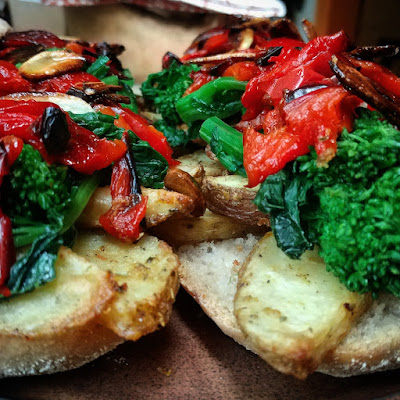 that caramelized sweet onion pesto is pretty terrific, dudes.
it's half an onion, minced, with a clove of garlic, and a pinch of sugar,
slowly browned over medium-low heat, with the oil i used to cook the garlic.
when the onions got translucent,
i added 2 tsp of red wine vinegar and some salt,
and reduced the whole thing until it was rich and dark,
then i mashed it all up and spread it on those homemade buns.
yeah. 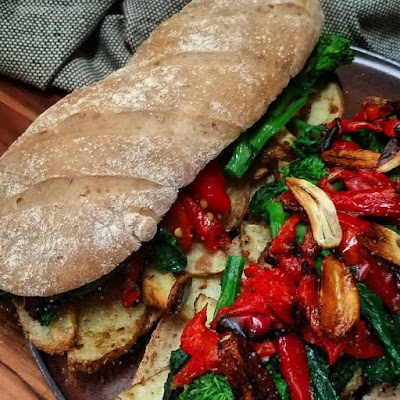 good bread makes better people,
and the breads are getting better and better around here.
-
*
SESAME-SEEDED SEMOLINA BREAD!
-
the oven is basically always running around 400℉ over here.
-
in my stand mixer with the dough hook doing its strongarm thing, i mixed:
1 cup king arthur white whole wheat flour;
3/4 cup king arthur bread flour;
1/4 cup semolina flour;
1 pkg dry active yeast;
2 tsp sea salt;
1 tsp sugar;
1 tsp bread machine yeast;
3 T toasted sesame seeds;
2 T olive oil;
1 cup warm water.
kneaded on low-low for 11 minutes,
and risen until doubled in size,
divided into 3, rolled in cormeal,
and allowed to rise with slits in the tops for another 'nother twenty-thirty minutes or so.....
then baked for thirty minutes.
it's not even really science, it's just F*ing awesome.
and molto italiano.
and molto delicioso.
and just another notch in the ol' sandwich week conquest belt.
yep.
***********
i may be the worst at everything else.
i'm certainly overwhelmed and under-enthused and distant, literally, and figuratively,
at the least,
and abrasice and confrontational and explosive at the worst.....
it isn't easy, but i doubt that is the sort of thing anybody really cares about.
i love birthdays. i do. for real, and a lot.
yesterday, my littlest sister would've been 39.
and that F*ing sucks.
and it affected every aspect fo my day, even though there's nothing i can do about it.
so,
i had a tough time, and even throwing myself into work,
or distracting myself with sandwiches,
or focusing on the hurtful back and forth between me and those closest to me
didn't help at all.
if anything, everything made it worse,
and by the time it was dinnertime,
i didn't even document what i was eatin' because it didn't matter.
(it was excellent, of course).
the things that ARE really happening feel pretty bad,
and the things that aren't feel the same.
i may be some sort of sandwich savant,
but i'm a sh!t-hot mess in every other way;
never quiet, never soft.....
this hot fire spat by Albie Rock