dammit.
these look like tiny bird bodies,
and i can't stop thinking about that: 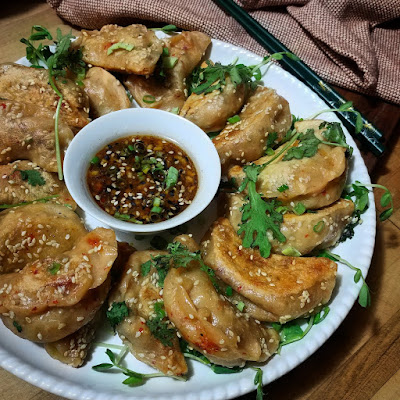 YIKES!!
i'm a dumpling dude, for sure,
and i put dumps on my face with efficient expertise often.
i tried adding a little pimenton accent to my dough this time,
and the results left me feeling like a predator in a henhouse, man.
there's nothin' new about my dumplings.
i nailed the process years ago, and have been tweaking it just the barest amounts
ever since.
however, i won't be adding this one to the list of upgrades.
ha.
-
the sauce was very garlic heavy, which i really liked.
but it mad my face VERY vegan.
y'ever have a beard?
y'ever eat a lotta heavily seasoned food?
y'ever worry that your beard absorbed a ton of that essence?
well, i've got news for you......it DID.
and so did your dumb tongue, and now you smell like a vegan.
shoutouts to all those flavors that aren't meat and salt, i guess.
i love what i eat, but i don't wanna wear it as cologne.
especially when i can't stop thinking about goya paintings while i eat.
it just seems sorta grotesque.
ANYway,
these dumps are indicative of september as a whole.
even the good things sorta sucked a little.
so there's that.
but, OCTOBER, though.
i will not allow that to be a waterbaby bullsh!t bummer.
no way.
starting now, it's only hottness until no-thanks-vember;
never quiet, never soft.....
this hot fire spat by Albie Rock