if nuts will kill you, i feel bad for you, bro.
i mean, they have all the good things-
protein, fiber (probably), fat that is helpful, energy,
flavor, texture......
all the good things.
i had TWO kinds at the ready for a fuller-bodied, bigger-action-packed
double-decker sandie for you, and me, and everybody.
AND i added chocolate.
AND toasted coconut.
AND fresh berries.
AND two different homemade preserves.
mmhmmmm. 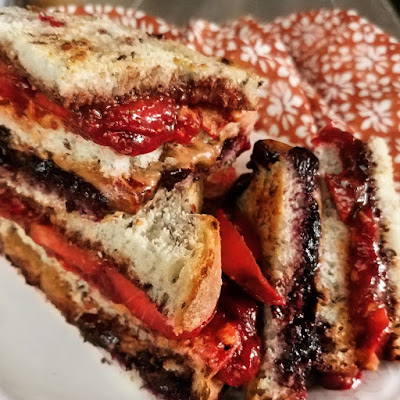 THAT'S HOW YOU DOO-DOO THAT FREAKY SH!T, SON!
there's no time for namby-pambies, whatever the F* those are.
y'heard?
it's time for sandwich week strength,
which in turn leads to just plain ol' strength.
that's a real thing, or at least it should be.
however,
for the first time in several years i did something i wasn't sure was allowed.
yeah, i used bread from a store.
yup.
i knowwwwwwwww.
i'm soooooo lazy.
but, i'm sorta supporting my favorite bakery in the area:
old village bakery.
they got that fluffy flavorful hot fire on hand every time i need some,
and that makes me feel comforted in an uncomfortable time of my life.
hahahaha.
so thanks bread guy and gals for this super-soft and sexy multigrain loaf of love.
did i toast the bread in a pan with a hint of raw coconut oil?
you bet your A* i did.
did i use CHONKY peanut butter?
obvi- i'm not an A*-hole, buddy.
how about luxxxurious and exxxpensive almond butter?
yeah, kid- i'm on it, because i've got money.
ahahhahahha.
homemade melted dark chocolate ganache?
you know it.
toasted unsweetened flaky coconut?
dudes, when you toast it, it tastes even F*ing better than when you don't.
and two kinds of preserves.
two.
because too much is the right amount.
word up. 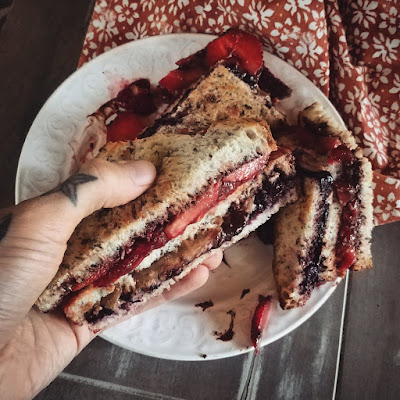 that's like, 1/2 cup of sugar per pound of fruit,
plus a tablespoon or three of lemon juice,
a splash of vanilla towards the end,
a little fresh lemon zest,
and time.
you just boil all the fresh fruit until it gets thiccc,
and the sugar caramelizes, sorta, and you get these luscious,
viciously viscous vats of spreadable good news.
for real.
y'gotta stir it, and keep it from burning, but it's so simple otherwise-
just bubblin' away on like, medium heat, for a whiiiiiiile-
twenty minutes of more, and you're a superhero.
guys!
that's an untoasted soft layer of central multigrain,
with chonky peanut jauns and strawberry preserves,
and whole fresh sliced strawbz covered in toasted coconut on there,
and on the flipped almond side, there's preservy bloobs,
and homemade chocolate SAUCE,
and  maybe a little more coconut.
you don't know me.
but, the pre-toasted endcaps get it IN, friends.
allllll the texture, allllll the flavor, alllll the rich, decadent, indulgent dopeness
that anybody could possibly desire,
all in a nut-allergy-unfriendly stack-em-up.
do the different nut butts combined really make that much difference?
holy sh!t,.
the answer is yes. 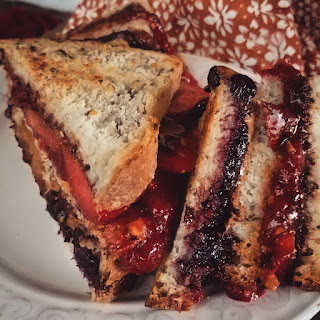 there's such complexity to the flavors,
but such cohesion to the thematic unity of similarly dissimilar things-
it could've been a basic pb & j.......
if my sh!t was weak af.
instead, it's a two-tone NUT BUTT' AND PRESERVES DELUXXXE.
why?
because i ain't no b!tch but i make a mean bad b!tch of a sammie.
that's real talk.
nobody has to care about nothing as much as i do,
or not care about everything else to such a high degree,
but this is all i have to look forward to, so i'm doing it as hard as i can;
never quiet, never soft.....
this hot fire spat by Albie Rock