gluten-freedom.
oh, man....
i s'pose it's not immediately a terrible thing,
although, most of the time, it totally eats sh!t.
i mean,
there's tons of stuff that doesn't have wheat or rye in it,
and it's all pretty good.
not seitan, of course,
that's precisely the exact opposite;
and yet,
it's also pretty high on the list of things that are expert.
i'm not an anti-gluten gas-blasting A*-lord,
but once in a while,
just to remind myself that i know wha i'm doing in this kitchen,
i get a little bit frisky, and whip up a batch of wheatless treats.
yeah.
i doo-doo that plot-twisty freakaleeky sh!t.
this time around,
while i have a big pot of simmering seitan on the stove-
my oven has a whole other 'nother angle it's workin',
and that's gluten-less muffins.
check the teleport: 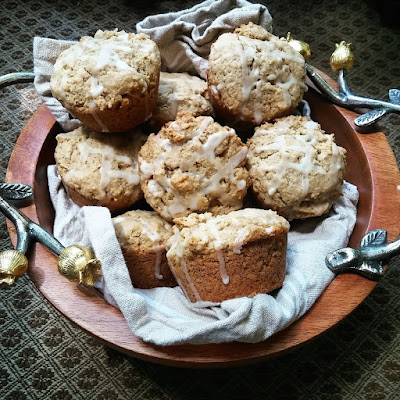 yuuuuuuuuuuuup.
i measured it out, without a recipe to guide me,
until it all looked like something i'd put in a pan and bake.
that's essentially the way i work,
and it worked, so i'm probably gonna keep doing it until i reliably fail,
and i'll adjust my methods from that point on,.
until then-
i did this:
lots of butterish (1.3 stixxx);
a little creamchee' (3T);
a cuppa brown sugar;
6oz. of applesauce;
2 cups brown rice flour;
1 cup rolled oats;
.5 cup oat flour;
1tsp xantham;
a pinch of salt;
1.5 tsps baking so' & pow';
.25 cup soymilk;
that's it.
350F bakey-bakes, for about half an hour,
and you get tasty, steamy, moist, crumbly muffins for your face.
the brown sugar makes up for any weak graininess in the crumb,
and just because boring-looking beige foods aren't my favorites,
i hit 'em up with some vanilla sugar icing,
just to snazz the scene up a little bit.
i doo-doo THAT freak-it-offishness, too.
i mean,
c'mon.
y'cant just leave it alone simply because it's good.
good enough is not enough,
especially when a little glaze could very well make it great.
yeah!
too much is the right amount,
and a little exxxtra hottness has never been a bad idea.
word.
you don't need wheat to have a good time.
heck,
you don't need a lot of things,
but that doesn't mean you can't indulge, man.
anyway,
i took a divergent path for our breakfast blocks,
and it turned into something delicious.
i'm feeling enthusiastic about sharing new food and flavor
with harvest and maple,
and for making up some new recipes with them on hand to witness
and contribute to the overall big picturesque big action.
also,
i'm supplementing the wheatlessness with this pot of seitan,
and that's going a loooong way towards activating the tasty dinnertime jauns
we've come to expect at the Folk Life & Liberty Fortress.
wordimus pime.
***********
the kids, the lady, the dog, and i.
that's a F*ing family, am i right?
i like it,
and the time we span is filled with food, and laughter,
and sharing information, telling stories, and brainstorming new ideas.
that's the best part, neighbors.
discussing our views,
and concurrently experiencing the process and progress
of woodsly goodsly Folk Life.
i can't think of a better way to invest a few days in togetherness,
and i'm doing every-damned-thing to make sure all these minutes matter the most.
we're working together,
and it seems like that's working out;
never quiet, never soft.....
this hot fire spat by Albie Rock