the first skull of april: 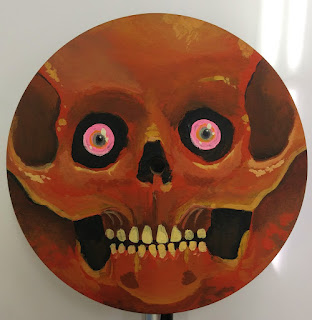 what?
you though we were done?
c'mon.
what am i?
an A*-hole?
i don't think so...but don't hold me to that
so here he is-
one dirty boi, overpainted on three layers of failed coolness,
stacked up on a circle with a hole in the center.
yep.
...and with pink eyes, because cali likes those.
(she told me so)
without those eyes, it didn't look nearly so worried-
but the again, life imitates art, so maybe there's more to the story?
maybe.
i had a different day scheduled than the one i got.
that's real.
i thought my first two clients were totally not the two that walked in the door.
i also thought my third client was gonna get more tattoo than what we did.
i guess that sunday afternoon in the south discombobulated my idea of the day.
ha.
that's wild, really.
i built a bear and ate mall pizza,
and that was so out of character that i apparently forgot all about what tattooing
even was for a second or two.
awwwww.
relax.
it all worked out,
and i had a minute or ten to fix past mistakes on the third or fourth take.
now if i can apply that to real life, i'll be in good shape.
third time is the charm.
three is the magic number.
three strikes and i'm out?
we'll see.
i'm moving forward through time and space,
and doing a fair bit of driving this week, across new england.
maybe there's some clarity to be found in journeying?
i guess we're gonna learn all about that;
never quiet, never soft.....
this hot fire spat by Albie Rock