i don't know what's up.
i do the tattoos that i'm asked to do,
i paint the skulls i wanna paint,
i read books (about dinosaurs and swords),
i watch something informative (hopefully),
and i try my damnedest to make the most of my days at work.
i'm not there to NOT work, even when it's not tattoos that i'm doing.
that's why it's not called going to hang out.
that's what it's called AMPERSAND, man.
yeah, we do tattoos.....AND other stuff.
AND all the stuff.
so when i'm at work, i wanna work on somethin' that makes the time
that's being spanned mine all mine all mine.
uh-huh- i'm taking that time with my own two hands...
so after a couple of tattoos yesterday,
i messed around and made another 'nother small skull.
four inches of spacemonster headspace?
yep. 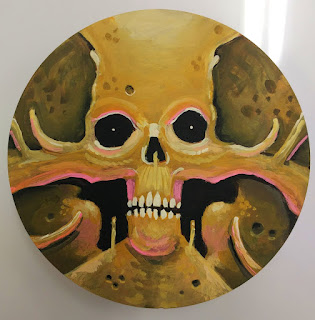 WORD.
i don't hate the antler-effect of those tiiiight cheekybones, bro.
the walls are filling up SO fast now.
and i like the way it looks a LOT.
my paintbrushes are really taking a beatin',
and it's having an effect the style that's evolving.
i'm running low on those circles,
and getting super- excited for some triceratops in the near future.
*
i'll be headed down to connecticut for less than twenty four hours.
uh-huh.
maple star is in her last performance as part of the theater program
at cheshire high school....
i gotta be there.
it's mandatory.
so i'm zippin' down there today, and zippin' back up here in the dark tomorrow morning.
there's babies being born sooner than later;
there's appointments to zap if babies aren't showing up;
there's this F*ing dog to drag with me back and forth...
it's a brutal blast back and forth, but it's all got to happen.
i feel it, deep in my bones-
everything is important, and that's a fact;
never quiet, never soft.....
this hot fire spat by Albie Rock