yeah-
when i'm frickin' freezin',
and i'm feelin' maybe a little sniffly,
and i need something to warm me up and fill in the blanks
that are echoing around my organs in the hollow of my chest cavity,
what i make is soup.
mmhmm.
soup, dudes.
i like a wet bath of vegetables in flavorful water.
i went a little spicy (just a baby bit),
but i also went hard on the vegetable content.
check the teleport: 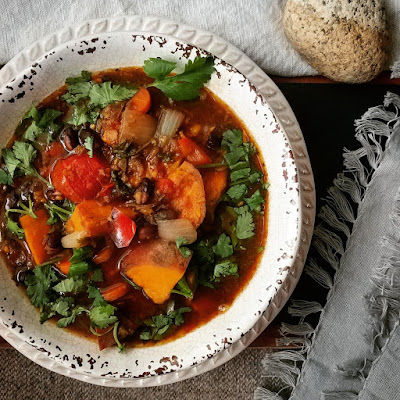 SOPA!!!
that's what's up, neighbors....
a vat of thickfreakness for my freakin' face.
i truly needed it.
although possibly not after a batch of way too burly tacos.
ugh.
if overdoing it is a good thing, then i'm the best.
ha.
what's IN this beautiful bowl of hottness/
i'll tell you all about it:
-
*
SWEE'POTATO BLACKBEAN RED LENTIL SOUP!
-
in a two quart sauce pot, with a glug or two of olive oil, on high heat, saute:
1/2 cup chopped onion;
1/2 cup each red and green bell pepper;
1 peeled medium carrot, sliced into 1/4" discs;
2 cloves crushed garlic;
1/2 sweet potato, chunked;
1/4 cup red lentils-
get that going, and add in:
1/2 tsp smoked paprika;
1/2 tsp GPOP;
1 T nootch;
1 tsp oregano;
1/2 tsp cumin;
pink salt and black pepper;
2 bay leaves;
1 cup sweet cherry tomatoes;
swirl that around, then pour in:
2 cups warm water + 2 tsp better-than-bouillon broth base,
and half a can of black beans WITH that sopa in there.
-
THAT is a lot of good stuff to be messin' with.
i also added a little cayenne and some jalapeno pepper, too.
like i told you, it's a little spicy.
i got it boilin' then simmered it for half an hour,
and what i ended up with is the new hottness for soup situations
by which all future soups will be compared.
that's no joke.
i know you see those cilantro sprankles on top.
that's just how i do things, dudes.
mmhmm.
soup is like a deep-tissue hug, with that soothing liquid flowing
to all the extremities of your physical and metaphysical soul, bro.
***********
what's in store for today?
man, i don't know.
i had the day off, but i now i think i have the day ON.
there's springtime work to be done both at AMPERSAND TATTOO,
and at the Folk Life & Liberty Fortress.
of course, it's a damned cold and snow-covered slippery mess of a day, too.
and it's my friend shawn's berfday, too.
so happy berfday to him, for sure.
it's also an ex-girlfriend's b-day-
and i wish i had the kind of brain that didn't remember those things.
really, it only takes up a little space, but i could be using that for something better-
like the thread counts of different napkins or whatever.
i keep count.
i'm not even trying.
it's a passive action that's constantly ongoing in the way back of my processor.
i can't remember all sorts of things these days.
maybe i'm just aging, maybe it's something more sinister, i really don't know.
i AM effin' with those tocopherols, and omega-3's, and turmeric,
and those fatty-bonding adaptogens and so on.
that stuff can regrow brain cells.
did you know that?
it can't regrow memories, obvi, but it makes more room for new ones, probably.
i'm not a nutrition-based neuropathologist or anything.
maybe there will be space for something better than birthdays.
i barely remember what i say from time to time after time-
i repeat myself when i'm feeling down.
i repeat myself when i'm feeling down.
friends don't keep score.
a former friend who literally treated me right just once
said that immediately after i said thank you for the (frankly) giant surprise
of him catching the tab for a change.
now,
i dunno what the final score was in our friendship,
but i clearly recall that he posted up just that single digit,
so even though i am unsure of any exact tally,
i know his assessment was definitely working in his favor.
ha.
what am i even saying?
i'm saying that my recollection is as selective as my collections.
i don't remember what we ate, just that i was surprised that he paid
(i'm almost positive it was a buffet)
but i know what day somebody i haven't spoken to in years was born.
what's important to one person isn't necessarily actually important to anybody else.
heck, most of what i know isn't even actually important to me.
but it's in there, for better or worse, whether i try to hold onto it or let it go.
maybe these flax seeds are gonna help fix some of that,
or maybe they're just gonna make me poop a lot;
never quiet, never soft.....
this hot fire spat by Albie Rock