you know i made treats.
yup.
all by my lonely, i was up and at 'em after i said the magic words,
and i had my oven ON,
and my mixer mixin',
and my dough risin',
and all the things that need to intersect and interact
and activate all the expert interwoven forms and functions.
dudes,
on the first of the month, we make treats.
and by 'we', i mean 'me',
although i often eat enough for a crowd.
and this was no exception, although they were exceptional.
check the teleport: 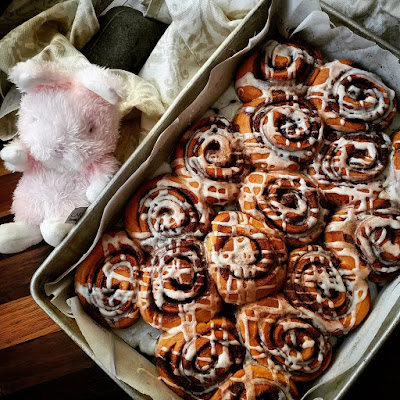 CINNA-MANBUNZ!
that's my favorite way to begin the month, man.
whorls of swirling caramelized sumptuosity,
with exxxtra icing and cinnamon sprankles.
i have not been making these all these years in the hopes that they'd get WORSE.
that's no joke.
and they get better and better and better.
better is what i'm on about, brothers and sisters.
sixteen of 'em this time.
i dunno how that happened, but that';s MORE than usual,
and more is better.
in fact, too much is the right amount, so more is mandatory.
i made it work, and i made myself a shark-gluttonous overachiever...
here's the recipe,
for all of y'all who want your very own batch of from-scratch fresh-to-deathness.
-
*
CINNZYBABIES!
-
preheat your oven to 360℉
-
warm up 1 cup of s'milk, with 1 tsp vanilla, and half a stick (4 T) vegan butter.
when the butterish is melted, let it cool a bit, to warmishness but not hotness,
and add 1 tsp bread machine yeast. allow that to bloom-
-
in your magnificent mixer, standing upright, with the dough hook affixed,
combine:
1/4 cup sugar;
2 T brown sugar;
1 pkg active dry yeast;
1/2 tsp sea salt;
3 cups king arthur flour;
1/2 tsp cinnamon;
1/2 tsp vanilla....
get that moving, and pour in the s'milk-
knead it up for 11 minutes until it's a firm shiny ball of elastic dough.
mmmmm.
good dough gets me psyched.
cover it and let it rise for 15 minutes-
-
meanwhile, line a 9" x 12" pan with parchment.
and then make the filling:
-
in a mixin' bowl, cream up:
1 tsp vanilla;
1 tsp cinnamon;
1/4 tsp nutmeg;
dash of allspice;
1 cup dark brown sugar;
6 T vegan butter......
-
on a well floured surface- roll out a big fat dough rectangle,
and evenly spread the filling to one long and both short edges.
leave one long length for sealing it shut after you roll it-
and when you're rolling?
the tighter you roll, the more swirl you get-
wet the unsugared edge with s'milk,
and make sure the seam is underneath the resultant log.
tight.
i divided it in half four times-
that's sweet sixteen.
and i arranged them irregularly in the pan, with about half an hour of rise time
before i baked them for about half an hour.
nothing is precise around here, but the results are usually great anyway.
i'm encouraged by that.
-
how much sugar is in these? SO much.
but that's alright.
they still need ICING.
i already told you: too much is the right amount.
a cup of powdered sugar, a splash of vanilla, a few tablespoons of s'milk.
thick, sweet, fresh, pretty.
yeah.
and a few shakes of cinnamon after just to be sure y'all understand how i'm livin'.
-
i ate seven of 'em myself.
i know... that's effed up.
they're too good not to go all out on, though, bro.
i'm ok.
it's ok.
we're all gonna be ok.
*
i'll be waiting for some showers.
they take about half the month to materialize.
in fact,
we're more likely to get one more snow storm before we're done with winter's touch.
april is a wild one.
you might think it's fully spingtime,
but for two more months, you just shiver a little bit all the time.
that's the woodsly goodness, where tough folks live hard lives.
i think.
i'm busy tattooing and eating sweets and walking this dumb dog of mine,
filling up the time in between bursts of family time and concentrated affection.
none of it is easy, but that's not the point, it seems.
making the most of What Is, and making that matter more.
that's the best we've got.
i am grateful for the people who let me be a part of their lives.
i'm grateful for the daily doings of my determination.
mostly, i've got gratitude for the bright spots that make it worth a damn.
i know i'm not owed anything, so i hope i at least have earned them;
never quiet, never soft.....
this hot fire spat by Albie Rock