pretzel knots.
y'know?
that's a thing.
i made 'em smaller than my usual softies.
and while they're truly verrrry pretzely-tastin',
they're also different on the inside, too.
there's MORE of 'em, and that's really what we all want, anyway.
soft, different, and numerous.
i can definitely enjoy that.
that's basically a lot like the stepkids, after all.
ha.
i have gotten a little obsessed with soft homemade pretzels this year.
i admit it.
they're good.
they're really good.
they're the kind of treat that practice perfects and rewards
with better texture and softer crumb and balanced brownness.
mmhmm.
look: 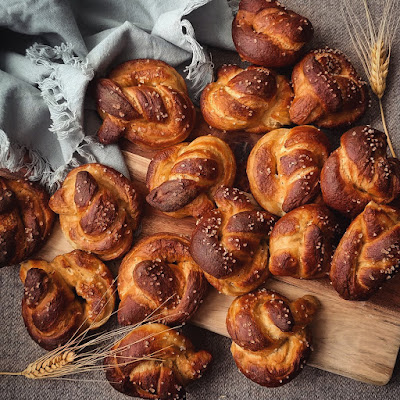 SIXTEEN KNOTS IS A LOT!
after boilin', they bloomed up to be bigger than i thought they would.
that's not terrible news.
but, four big bites is more than i imagined i'd have to use with my teeth for.
whatever, i ate a great many of these fresh out of the oven,
and then a few extra at the studio.
it was a sourpuss suckbomb snow day, again;
and while anything could have happened,
and for all i know might have elsewhere,
the only things going on in my immediate area were low visibility
and shivery temperatures.
so the pretzel knots were kind of the highlight, man.
is there anything especially notable about these??
yeah.
oat bran.
that's great stuff.
and vegan butter by the buttload.
that makes them soft.
tell you what, i'll give you the recipe:
-
*
PRE'Z'KNOTZ!!
-
i already had my oven up to 465 bread-baking degrees,
but i turned it down to 450° when i put my pretzels in.
-
line a cookie sheet with parchment.
personally, i lined my seasoned steel baking tray with parchment.
-
combine 1/4 cup very warm water with 2 T real new hampshire maple syrup,
and 1 tsp bread machine yeast....stir it and let it bloom for 5 minutes.
-
in your trustworthy assistant, mr. stand-upright mixer, with the dough hook attached,
combine:
3 cups king arthur flour;
1/2 tsp sea salt;
1 tsp baking soda;
1/4 cup oat bran;
1/4 cup vegan butter;
1 pkg fast-actin' yeast;
3/4 cup + 1T warm water.
let that soak, undisturbed while the maple/water/yeast activates.
combine both and knead for 11 minutes until it's a sticky, soft shiny ball.
cover it and let it get BIG, boi.
-
bring 8 cups of water, with 2 tsp salt and 3 heapin' T of baking soda to a rolling boil,
while the dough rises.
divide that fat heap of dough into quarters, but like, do that four separate times.
roll 'em out long, double twist the tips,
and let 'em puff up again for another 'nother 5 minutes.
yup.
-
dunk 'em four at a time into that alkaline boiling water,
and give 'em fifteen seconds per side.
remove them with a spider, drain 'em, and arrange them on the parchment,
liberally spranklin' them with coarse big crystal sea salt.
-
bake them  for 14 minutes,
turning the tray halfway at the halfway point.....
and you'll have these magnificent glorious golden goodies.
you'll feel better if you have a couple of these.
unless you hate carbs,
or you're sensitive to salt or gluten,
or if you just don't like pretzels.
i s'pose those are legit reasons to refrain...
but everybody else will get a brief boost of joy with every bite.
they don't solve many problems,
but they don't cause any, either.
and being smaller so you can eat MORE for the same level of fullness
is kind of freakin' awesome.
i love that.
too much is the right amount, as you are all already well aware.
and MORE pretzels might be what i'm all about.
*
the sun is half out.
the ice is half melted.
the snow is slippery,
the clouds that remain are darrrrrrk.
the woodsly goodness is a weird place, neighbors.
yesterday was a total bummer in a lot of ways,
but hot soup, fresh-baked bread,
and a sh!theap of salty knots all helped a little.
i did all the pull-ups, and that worked well for a little bit-
being sore and spent is a good way to occupy your mind and body.
i did that.
and now?
well,
unless i hear otherwise, i'm gonna be tattooing a little.
and likely i'll be dwelling on the unfolding events and additions, exclusions,
exceptions, and exemptions that compose april in the mountains.
there's everything and nothing all really happening,
and i've been assured that that IS the whole point.
i'm gonna keep on keepin' on, and see where the eff i end up;
never quiet, never soft.....
this hot fire spat by Albie Rock